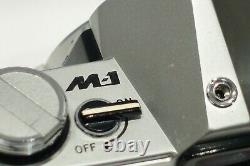 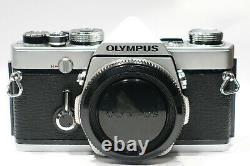 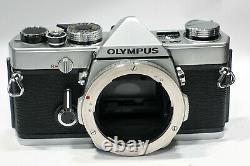 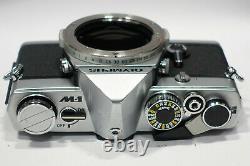 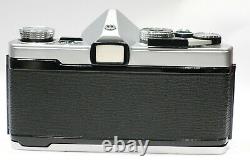 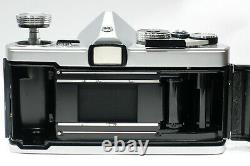 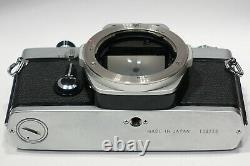 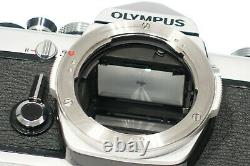 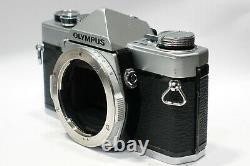 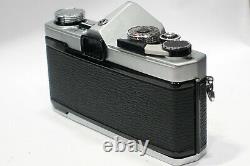 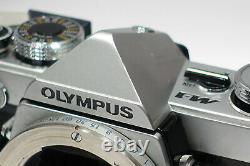 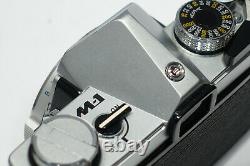 Extremely rare camera only made for a short period in late 1972/early 1973 before being re-branded as OM-1 and OM-System in Feb 1973. Comes with Olympus body cap, fitted with original 1-1 Focusing screen. A brief history of this unusual Camera was Olympus launched their then new M-System line up in 1972 but Leica took offense due to them also producing a M-System and had a rangefinder camera called the M1, Olympus then rebranded the M-1 as a OM-1 and the M-System became OM-System and the rest is history.

Not many of these cameras came to market with a lot being destroyed or top plates changed to OM-1. Some minor differences exist than later OM-1 models such as slot-head screws to front lens mount rather than cross head screws and a smaller film pressure plate inside rear film door, the M-1 also never had the Motor Drive socket to base. Shutter works fine, all speeds sound correct, viewfinder is nice and bright and clear with no staining.

Meter has been tested with a 1.35v battery and it works fine (never use a 1.5v or 1.55v battery in a M-1). All Looks excellent+ condition, there is some minor wear to black edges on front, tiny tiny mark to edge on top of prism, barely noticable, please see photos. A very usable and collectable camera. _gsrx_vers_856 GS 7.0.20 (856).

The item "Olympus M-1 35mm SLR camera body 1972/73 Rare Pre-OM Exc+ OM/M System lens mount" is in sale since Wednesday, January 8, 2020. This item is in the category "Cameras & Photography\Film Photography\Film Cameras". The seller is "mandhphoto" and is located in Shefford. This item can be shipped worldwide.